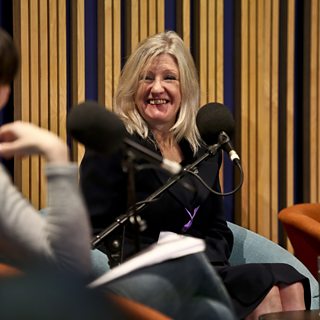 Two animal psychologists and a historian of animal studies join Eleanor Rosamund Barraclought to discuss whether it’s possible to recognise similar traits in humans, chimps, crows, hawks, dogs and cats in terms of affinity and attachment, despite different evolutionary paths. How do we know when a chimp wants to play? How does one crow decide what to feed its mate? The Free Thinking Festival explores the emotional similarities & differences between humans & animals.

Nicky Clayton is a scientist and a dancer who began as a zoo-ologist and moved into psychology. She is Professor of Comparative Cognition at the University of Cambridge and a Fellow of the Royal Society. She is also Scientist in Residence at dance company Rambert and co-founder of The Captured Thought blog and project. Her expertise is in studying members of the crow family, who have huge brains for their body size, and in studying thinking with and without words.

Kim Bard is a Professor at the University of Portsmouth. She has studied the development of emotions, cognition, communication, and attachment in captive young chimpanzees for over 30 years. Her research concerns understanding the process of development in evolution and contributes to captive animal welfare.

Erica Fudge is Professor of English Studies and Director of the British Animal Studies Network at the University of Strathclyde, Glasgow. She has written widely on modern and historical human-animal relationships and has recently finished a study of people’s lives with their livestock animals in early modern England titled Quick Cattle and Dying Wishes.