It’s a Kind of Magic.

Harry Houdini famously claimed that no-one can be considered an accomplished magician until they have mastered the cups and balls illusion.

With three upturned cups and three balls, the balls are made to perform the logic-defying feat of ‘jumping’ from one cup to another. The trick relies on a hidden extra ball, and it works through the magician’s ability to distract those watching so they don’t notice what’s really happening.

“Magic reveals so much about the way we see and remember things,” says Professor Nicola Clayton. “It’s surprising that so few psychologists are interested in it. Understanding why we can be tricked tells us a lot about the mind, and the constraints and quirks in our thinking.”

Clayton is fascinated by cognition – how humans and animals think, remember, and experience the world – and how this ability evolved. As Professor of Comparative Cognition in the University of Cambridge’s Department of Psychology and Fellow of the Royal Society, she is particularly interested in corvids, the family of birds including jackdaws, rooks and jays. Her work is challenging commonly-held assumptions that mental abilities such as remembering the past, planning for the future, and understanding the minds of others are uniquely human.

Where connections have been made between magic and psychology, they have largely been about the human mind. But given Clayton’s interest in bird minds, the obvious question for her is: what can magic teach her about her birds? As a result she has formed an unusual collaboration with a man who is accomplished in the art of fooling people.

Professor Clive Wilkins is a professional magician and a member of the Magic Circle who loves to make people question their reality. Since 2012 he has been Artist in Residence in the University of Cambridge’s Department of Psychology, where he has written and published a series of novels –The Moustachio Quartet – that explore magic, memory and psychology. “Gone are the days when experts can work in silos on their own,” he says. “The variations in the ways Nicky and I, as scientist and artist, perceive the world around us give us both new ideas.”

Magicians like Wilkins have a good understanding of how our human brains work, and they use this to their advantage. For them, our first flaw is not remembering things accurately. Our second is being obsessed with anticipating the future, or ‘mental time travel’, which relies on using our memories of things that happened in the past. “What’s the point of us remembering things if we never reflect on them and use them again?” he asks.

“If you see a ball moving from the right cup to the left cup several times, I don’t even have to finish the entire sequence and your mind is already there,” says Wilkins. “You can be convinced you know where the ball is, because the brain wants to be one step ahead and it has already made the assumption – your brain has taken over from your eyes.” And that’s where the inconsistencies of a trick can be hidden.

Together, the pair have tested a version of the cups and balls trick on jays – replacing the balls with worms and adding beak-sized handles to the tops of the cups. When a worm isn’t where the jay expected, it looks surprised and raises its crest. If it finds something less appetising than the expected worm, it will throw the cup across the floor with its beak. If it uncovers something even more tasty, it will eat it.

“We’ve discovered that the birds are tricked by magic,” says Wilkins. “It’s such a simple and elegant tool for asking lots of questions about the way their minds work.” Clayton is tying this approach to investigating her birds’ cache protection tactics. Successfully hiding food for later, or caching, relies on birds being able to trick other birds that might be watching.

“We know that corvids go to great lengths to protect their caches,” she says. “This behaviour is something a bird doesn’t do if it’s being observed by its mate. It is something it doesn’t do if it caches in private. That’s a little bit deceptive, isn’t it? Almost like being a magician.” 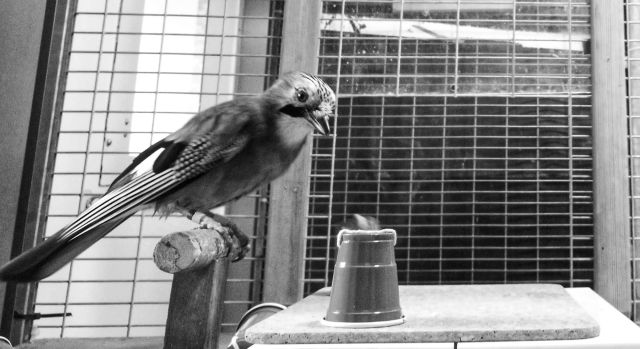 Jays can be tricked by magic

Drawing parallels with Wilkins’ understanding of mind-manipulation, Clayton says that the corvids’ ability to successfully hide their food for the future requires sophisticated social cognition. “If the onlookers are deceived and can’t steal the caches, then magic could even be favoured by natural selection,” she says.

In experiments, Clayton found that if a jay realises it is being watched by another jay while hiding its food, it uses confusion tactics to move the food to a new hiding place – a bird version of the cups and balls trick. The jay will move the food, or pretend to move it, several times, so that it doesn’t end up where the onlooker expects.

There are various techniques to this ‘sleight of beak’ – specific movements and mannerisms that the birds can learn – to deceive observers. “Their tactics are a bird-version of what magicians call Black Art,” says Wilkins. “We use dark surfaces to hide things. Birds also obscure what they’re doing by pushing their body between the food and the onlooker, so the onlooker can’t see what’s happening.”

“The birds only use these tactics once they’ve had specific experiences,” says Clayton. “This shows that the tactics aren’t in-built, but they may not be as cognitively complex as we thought.”

As well as protecting their own food, the birds can learn how to successfully steal from others. To do this, a bird has to see itself from the onlooker bird’s perspective. “They know they can be deceived, which means they can form mental images of how the world looks to another bird,” says Clayton. “A lot of magic tricks are actually very simple,” adds Wilkins, “and the birds are doing them quite naturally.”

The work is shedding new light on the evolution of our ability for mental time travel and theory of mind. It shows that putting ourselves in someone else’s position or anticipating the future is not uniquely human. The jays remember what happened – where, and when – and can use those past experiences to anticipate the future. More importantly they can also plan for the future, especially when this requires them to keep track of who was watching, when, and take action accordingly.

Clayton and Wilkins began collaborating eight years ago after meeting on a dance floor, at a tango milonga. Unusually for an arts and science partnership, they have not drawn on each other’s work to develop their own, but have worked together to create something new. Mixing their expertise in science and magic with Wilkins’ skills in art and fiction-writing, and their mutual interest in dance, has resulted in the emergence of something truly unique. It’s all drawn together on their website, The Captured Thought.

“What’s special about our collaboration is the fact that we’ve published a whole suite of peer-reviewed papers together,” says Clayton. “The magic aspect is taking the science in a direction it wouldn’t otherwise have gone.” For Wilkins, their partnership has altered the way he sees his audiences. “I’ve become more precise about how I perform – I can understand how people are seeing and what they’re looking for, and use it to my advantage.”

The pair’s double act draws large audiences from wide-ranging backgrounds. Following their first invited lecture at the Royal Institution, London in 2012, they quickly began attracting attention and have since given talks at both arts and science venues across the world. “Word gets around that our events are not a lecture, they’re a performance,” says Wilkins. “We dance tango, we use magic tricks and movie clips – we make sure we engage people’s attention.”

Wilkins and Clayton perform together for diverse audiences

Their focus on transferable skills has led them to develop workshops that are valued far beyond their own fields. One, called ‘Listening for leaders and followers’, runs at institutions like Cambridge Judge Business School and is helping those preparing for careers in the business world to better understand social communication. “We try to integrate evidence from science, art and the performing arts to explore the subjective experience of thinking,” says Clayton.

The pair say they are still surprised at the level of interest in their work. But perhaps – understanding so much about our minds – they shouldn’t be.

This article, written by Jacqueline Garget, first appeared on The University of Cambridge website on 6th March 2020 at https://www.cam.ac.uk/stories/akindofmagic

Join Nicky and Clive Live at the Cambridge Science Festival on 14th March, 2020 to explore the subjective experience of thinking and what this reveals about our minds.